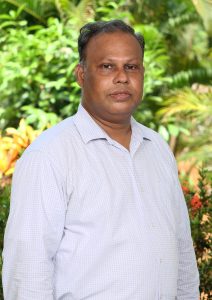 He obtained B. Sc., M. Sc. and M. Phil. degrees from Department of Botany, Madras Christian College (Autonomous). He joined as a project fellow in the UGC Project entitled “Ultrastructural studies on Fucales, Phaeophyceae from Gulf of Mannar” and completed his Ph. D. degree in Algology from Centre for Advanced Studies in Botany, University of Madras in 2002. Further he continued his research on algae as a Post-Doctoral Researcher in the Biodiversity Research Centre, Academia Sinica, Taiwan from 2004 to 2013.

His key Research area is Algal Biodiversity – Diversity, Systematic, and Ecology of the freshwater Diatoms and also marine and freshwater algal floras of the Tamil Nadu. The courses taught by him are Algology, Algal Biotechnology, Bryology and Plant Anatomy.

National peer review journals. He has presented more than 40 research papers in International and National Conferences and symposia.

He has guided three M. Phil. and   15 M.Sc. research projects. He has organised 1 National Conference and 2 workshops. The notable administrative positions held by him are Co-convener, Anti- Ragging Committee, MCC. He is a Member of International Society for Diatom Research and Krishnamurthy Institute of Algology.

He served as Resource person and subject expert in various Workshops and Committees. He also is doing free consultancy service to the many researchers belonging to various colleges/Institutions for the identification of both freshwater and Marine Algae. His other recognitions include, Project fellow, UGC Major Project at University of Madras.