College Union Society MOTTO
“They are slaves who dare not be
In the right with two or three”
2020-2021
ALONE WE CAN DO SO LITTLE, TOGETHER WE CAN DO SO MUCH

History of Societies in MCC

The societies and associations in the college promote a variety of interests and activities that cannot be served within the limitations of classroom and syllabus. They were started on the initiative of members of staff and students who shared a particular enthusiasm and they live today by that same enthusiasm. Student office-bearers are elected to run these societies. Members of staff are associated with them as advisers and ex-officio heads.

All students on admission to the College automatically become members of the Union Society, which represents the interests of the students generally, holds collegiate and inter-collegiate debates, arranges for lectures by public men, and promotes social intercourse among students of this College and between them and students of other colleges. The present Society was formed in 1937, but it claims descent from the M.C.C. Debating Society, which was founded in 1877 with the motto “Truth’s like a torch, the more it’s shook, it shines”.

The College Christian Union grew out of a Prayer Union established in 1881. Along with similar associations all over India, it is affiliated to the Student Christian Movement. The Christian Union organises Bible study and prayer fellowships, holds Sunday Schools and camps, and runs a leprosy clinic at Pammal. Its drama group studies and performs Christian plays. Any Christian may join this Union, and so may others who want to know more about the Christian faith in practice.

Another society of wide and open membership is the Rural Service League. This association grew out of the College brotherhood in 1940. The league has been concentrating its efforts on the Old Tambaram village where it maintains an elementary school. The school has five classes and a strength of 350 and it is recognised by the Government. Students can support the league by subscriptions, by helping with the school children, by giving their manual labour and by distributing medicines. In the Students’ Service to the Blind they help with Braille classes, with exhibitions, and by reading books to students who are blind.

Various language associations encourage their members to cherish their own literature and to cultivate their mother-tongue; the Tamil Peravai (1887), the Andhra Bhashabhiranjani Sanghamu (1887), and the Malayali Association. The Samskrit Association was revived in 1937, which year also saw the beginnings of the Hindi Premi Mandali. The Mandali conducts Hindi courses outside College hours. Collections of books, presented to these associations, form the basis of the Indian language sections in the Library. The Tamil Peravai and the Samskrit Association conduct inter-collegiate competitions in oratory for trophies presented by Sri Pennathur Veeraraghvan. The English Association was formed in 1931.

Students in each of the optional subjects studied in the College have formed associations, which bring members of different classes together, promote discussion and sometimes invite eminent people to address them. According to the Philosophy Association (1887) “All out knowledge is ourselves to know”, while the History and Politics Association (1887) claims that “Through the ages one increasing purpose runs”. Next door to the History Association is the Gandhian Study Circle. The Economics Association promotes “intelligent interest and discussion of the fundamental problems in economic theory”, and has lately formed a Planning Forum, which investigates local conditions and keeps the College informed of national developments.

Since the institution of post-graduate studies in Botany and Zoology, the Natural History Association (1899) has divided into Zoology and Botany Associations, which hold meetings and exhibitions during term and sometimes go on excursions also. The physical Science Society has likewise separated into the Physics Association and the Chemistry Association. The Physics Association has conducted well-attended popular symposia in recent years. The Mathematics Association continues undivided, promoting interest in the subject by inviting outside speakers and discussing student papers. Derived from the Physical Science Society, but meeting on top of the Zoology building, is the Astronomical Society. The skies are usually clear over Tambaram, and many more stars can be seen through the College telescope.

There are also various societies not directly connected with academic disciplines, but serving special interests. Thus, the College Dramatic Society open to any who like acting and have a talent for it, stages an English play once a year. With the help of the Physics department, the Photographic Club provides facilities for developing, printing, enlarging, toning, and trick photography. So also, the Radio Club, formed in 1915, which has equipment for world-wide reception, and in which beginners are taught to construct their own radio sets.

Various other societies are formed from time to time, and each Hall organizations of its own. You could even become the founder of one yourself. 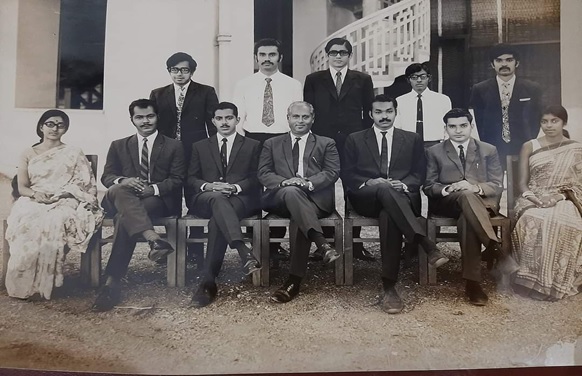 Sitting from left to right

Standing from left to right

Dr. William Miller was the Principal of Madras Christian College from 1862 to 1909. But his primary concern was the conduct of the college and gave his heart and soul, his time and talents, his thoughts and resources for the development of this educational institution. While studying at the Universities of Aberdeen and Edinburgh, Miller threw himself freely into the social and intellectual life of the University and took a leading part in Students’ Unions of various kinds. Miller gained that experience which was to help him in fostering and guiding similar unions in Madras Christian College. When the national movement (independence movement) was gaining momentum during the first decade of the 20th century, Dr. Miller was concerned that his students developed character, leadership, and values. In his opinion “SWARAJ” meant to give the students of MCC a larger share in the administration of India. What a vision for a man. Dr. William Miller started Extra-Curricular Forums and Societies which were destined to play a pivotal role in shaping the character and leadership qualities of the students. These were modeled after those in European Universities, notably in Scotland.

The path laid down by Dr. William Miller, in character and leadership building and inculcation of values was continued by all the succeeding Principals. Special mention must be made of Dr. Chandran D.S. Devanesan who joined the college in 1946 and became principal in 1962, gave tremendous impetus to the Student Union Society.  The Students Union Society went through many stages to form a whole cabinet and by upholding the entrusted traditions of MCC. The evolution will continue to bring out the pre-eminent outcome from the College Union Society. Doubtlessly it provides so many opportunities and platforms for the students to enrich their skills in all areas helping them fly with colours making victories in the history of Madras Christian College.

MCC has more than 8000+ students from different parts of the world in the lush green campus, as each year goes by, we are growing and diversifying both in academic and cultural aspects, so the CUS cabinet makes sure they are updated. Each cabinet member of the CUS holds certain responsibilities and duties to pay due respect and justice to the posts they hold on.

The Student Chairman is the formal representative of the College Union Society. The chairman shall convene and preside over the meetings of the General Body, the Students’ Council, and College Union Cabinet and ensure orderly conduct of the business.