MCC RSL school has been under the aegis of Madras Christian College, one of the most prestigious and premier institutions known for its educational services globally for over a period of 180 years.

As the Bible says in 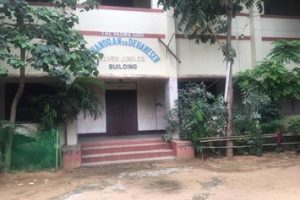 Based on policies of truth, compassion, and holistic education, the school prides itself on its contribution towards spiritual work and social work along with its educational feats.

With a great effort from the first Indian Principal of the Madras Christian College Padmashri Professor Chandran Devanesan and the tireless labor of Mr. Robert Guruswamy, the vulnerable and weaker sections of the society belonging to West Tambaram, Maandhoppu area, Irumbilyur, Kadapperi, Kannadiyar Paalaiyam were elevated to new heights of educational and divine consciousness. They were provided with social awareness and opportunities through the opening of the ‘Rural Service League’ (Graamiya Sevai Maiyam) which serves its great purpose even today.

Developmental stages of the school

Taking you down the vista of the best years and memorable achievements of the school:

The school was started in 1948 in a hay shed. Within a year the number of students increased upto 118 and the primary school was run by three teachers.

The school was solely headed by Mr. Arumugam and later with the help of Rev. E.O. Sha, the standards of the school was raised with Mrs. Chandra Murray as the head, Mr. Carol Joseph, Mr. Iyengar, Mr. Kuppuswamy 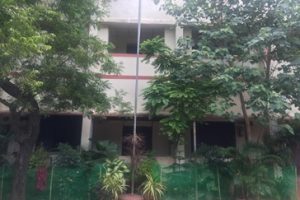 and Mr. Manogaran as the five faculties by Dr.Chandran Devanesan.

In 1963 the school got upgraded to a middle school.  Mr.John Deva Anugraham as the headmaster and Dr.Chandran Devanesan as the Correspondent together formed 23 teaching posts and elevated the school as the greatest school of excellence in Tambaram.

In 1963, a park was made by Dr. Chandran Devanesan for the children residing in the hills nearby the school and was opened by the then Chief Minsiter of Tamil Nadu Karmaveerar Kaamarajar. Later the street next to the area was named after  Dr. Chandra Devanesan and he was honoured.

With the encouragement of Mr.Arjunan Gnana Olivu and constant efforts of the headmaster Mr.Rajkumar the school was upgraded as high school in the year 1993. Classes I to V was categorized as primary school, VI to VIII as Aided and IX to XII under self finance stream.

The primary school which started in a hay shed was renovated as a building in the year 1974  and further extended with new classrooms for the grade 6th and 10th in the year 1993. In 1995 the Madras Metro Round Table – 95 set up a deep well for Drinking water facility. The same year the hay shed of the primary school was renovated into a concrete roof by the Madras Metro Round table and this was carried out through the support of the correspondent Mr.Densil S Bob and the headmistress Ms.Sugula Ross

In 1998, with the support of the Correspondent Mr.Densil S Bob the headmaster of the school Mr. Rajkumar upgraded the school with classes IX to XII as self finance division higher secondary school.

The Madras Metro Round Table built Restrooms for the school in the year 2000.

In 2007 our management opened computer classroom for the benefit of higher secondary students. 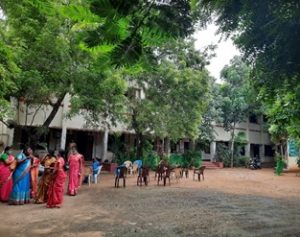 With the great support of the correspondent of the primary school building  Mr.S Yagnasekar and the constant efforts of the headmistress Mrs.D.Leethiyaal Santhakumari the plans to build a new building was brought in. Followed by that in the year 2012, due to the efforts of the correspondent Mr.Y.Ganachandra Johnson and the headmistress D.Leethiyaal Santhakumari and the great support of the bursar Mr. Soundar Rajan and the Principal of the college Dr.W. Alexander Jesudas the dedication of the new building was carried out.

In 2013, the mid day meal room was newly built for the benefit of the students. Also the old restrooms were demolished and built newly in the year 2017 by the management.

Names of the Correspondents

Activities of the School

The prayer assembly is usually held at 9.20 AM, invoking the blessings of the almighty, followed by which students read out important News, Thirukkural, scientific facts, and thoughts and also take relevant pledges every day. Each course is taught with the help of learning auxiliary devices which develop the ability and knowledge of students in a fun and easy way. The three-term education program formulated by the Tamil Nadu Government is followed. The school is surrounded by a natural environment filled with trees, flowering plants, medicinal plants, and a garden that is well maintained.

The students are encouraged to engage in extra-curricular activities such as dancing, singing, story-telling, drawing, drama, speech and essay-writing to expose their myriad talents. The reading skills of the students is developed through the resources in the library to hone their creative and intellectual ideas. In order to develop the artistic and literary ability of the students and to bring out their unique talents, the Literary Forum Competitions (Ilakkiya Mandra Pottigal) is held every month. In order to enhance the physical fitness and health of the students, activities such as pyramid making, yoga, aerobics are also taught. 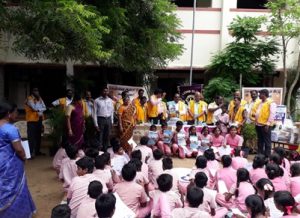 awarded prizes and appreciation certificates. Celebration of festivals and important events such as Republic Day, Independence Day, Children’s Day, Gandhi Jayanti, Kamarajar’s Birthday, and Teacher’s Day are conducted every year with great joy and fervour. The Tamizhar Thirunaal festival of Pongal is celebrated every year in our school in a ethnic manner by cooking Pongal and conducting traditional competitions such as ‘uriyadithal and kolam podudhal’

In order to create awareness about the importance of education to the community people, the faculty continuously engage in activities such as organizing campaigns for the admission of new students, visiting houses in the neighborhood giving away pamphlets and notices. The teachers generously sponsor tasty refreshments to the students. They 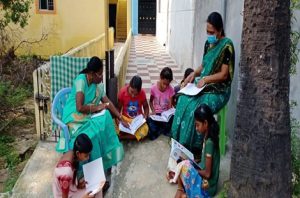 also sponsor for the transport facilities of a few students who come from faraway places.

Even during the corona period, the teachers went to the neighbourhood, to the houses of the students to teach them. This can vouch for the fact that the school is blessed with dedicated teachers who in spite of the pandemic went an extra mile for the benefit of the students.

Achievements of the Teachers

Following are the stellar triumphs of our dedicated teachers

Lion’s Club Best Teacher award was bagged by our RSL school teachers way too many times, behold the impressive list:

Achievements of the Students

Proud to delineate the collective prowess and amazing talents of our students who have won many laurels to the school.